Published by: Ken Meyer in Travel 3 years, 5 months ago

Haven't heard this one before on a flight. Flight delayed due to MS Surface falling out of its mount in the cockpit, cracking the screen. So, the captain had to go visit the "computer guy" before we could take off. At least he didnt have to call tech support... ????

Published by: Ken Meyer in Travel 3 years, 10 months ago

If you travel enough you will eventually encounter this guy or gal. On recent business trip one morning I was standing toward the front of the boarding line when he forced his way through the crowded gate area area and made it to the gate agent who was in the process of pre boarding families with infants, military personnel, etc.

Leavin' on a Jet Plane

So, here I am leavin' on a jet plane. Well, actually I am waiting for passengers of an arriving jetplane to deplane so I can leave...already 1.5 hrs delayed. There are about twenty of us air warriors watching the process. The door into the jetbridge is 36 or so inches wide. A rather portly gentleman waddles up the beltway and through the door and stops to chat with the gate agent, blocking all behind him. He apparently needed directions and couldn't move another three feet to allow others to just get around him. The gate agent was mortified. She was under pressure. She motioned him along. He ignored and kept asking questions. The people behind him were freaking out as were many if my fellow travelers awaiting to board. People, dang it, think about others when flying. The world does not revolve around you. The guy finally moved (waddled) along and we are now headed to board a 530p flight at 704p. Woohoo!

WiFi in the Sky

Wi-Fi on airplanes. Thirty years ago, after having spent a few weeks in New Hampshire in February before the Presidential primary, my wife and I were up late watching broadcast news. The phone rang. It was a friend who was on a cross country flight...calling from the airplane! Say what? Yes, he paid like ten dollars a minute to call as he was at 35000 feet and over the Rockies and called, just because he could. Fast forward thirty years. Now, while we can't make a phone call, for a nominal fee you can surf the internet, text and email friends and yes, even do some work, like I do ????, while in flight. So, it's kinda fun to watch people enjoying their pursuits. Some are intense as they bang away on their keyboards with a fervor that I can only interpret as a life or death email or text exchange that simply can't wait. Others engross themselves in a movie, complete with sound deadening headphones and then some get on Facebook and write "pithy" stories. I can't imagine anyone doing that but I am told it happens. ???? In any event, I am on a plane headed home, enjoying the wonders of technology, surfing the internet, watching a movie, texting friends and doing some work. (Just in case anyone asks) But I'm not making a phone call...that is so old school. lol

Touch Screen is not a Punch Screen

A note to air travelers. if you are in a seat with the video screen on the back of the seat in front of you, it is a "TOUCH" screen, not a "PUNCH" screen. Yes, the guy behind me about gave me whiplash trying to watch Three' s Company". Geez people, think about physics every once in a while and think about others around you.

Making Good Use of Time

I caught a Delta ground crew guy as he was getting up from knocking out A few dozen pushups on the tarmac. Now that is making good use of time while he waits for the crew to push back the plane.

A Backpack...with its own Backpack! 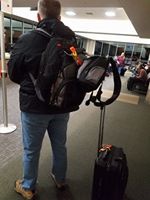 Mind Your Own Baggage

I travel light by checking my bag. I have a small briefcase which I place in the overhead and then fold and place my blazer or suitcoat on top. Why do people, who board with multiple large bags, feel they have the right to move my personal items to make room for theirs? Very rude. That it also one reason I sit in an aisle seat so I can protect it....which I just had to do. People, don't be rude!