Overheard on a Recent Delta Flight

Published by: Ken Meyer in Travel 3 years, 9 months ago

On a morning flight, sitting in the seat just in front, a thirty something young lady with a toddler.

The Fun of Air Travel

Published by: Ken Meyer in Travel 3 years, 10 months ago

Every now and then I get to laugh at myself, along with others.

Published by: Ken Meyer in Travel 3 years, 11 months ago

I don't claim to be an expert, but I have logged nearly two million miles on a couple thousand flights inside canisters with wings that are shooting through the air. I have learned a few things over the years and made lots of observations during the process.

Published by: Ken Meyer in Travel 4 years, 10 months ago 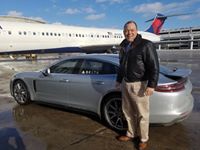 Published by: Ken Meyer in Travel 5 years, 5 months ago

I am amused by travelers who either 1) got a very rare first class upgrade 2) purchased an upgrade before boarding to impress someone or 3) the occasional traveler who splurged. Inevitably they tend to come on board like they own the plane, ignore standard protocols for bag storage etc and generally have a bit of an attitude. I have such a couple sitting across from me. They make things much harder for everyone, especially the flight attendants. Let them wait for that bloody Mary until the plane is fully boarded. Geez, people have some manners.

Decorum is Sometimes Lost on Travelers

Published by: Ken Meyer in Travel 5 years, 5 months ago

Note to the guy sitting in 1c, the rest of the plane doesn't really want or need to know about your accidents and/or medical conditions. Just saying. Tone it down. Was there a full moon last night? This flight is bizarre.

Another Self Absorbed Traveler

Published by: Ken Meyer in Travel 5 years, 8 months ago

The MD 88 is a full sized aircraft with 3 seats on one side and 2 on the other. The overhead cargo bins are extended a bit on the 3 seat side and can fit most rollerboard bags straight in. I always board with a briefcase that takes little room so I always load it in the shorter bin side. Today, I am also traveling with a nice hat (a stetson stratoliner. non crushable) which I place right on top of my briefcase. I am sitting right across the aisle from them. A guy sitting in the opposite aisle seat comes in with a backpack and a computer bag. Without even looking, he threw his bag on too of mine, crushing my hat. I asked him to watch my hat. He indignantly said, what hat? I got up to show him. He then verbally accosted me a bit asking why I didn't just load it in "my side". I informed this idiot about the sizing of the bins etc but he really just wanted to be a jackass...which he was. That said, this happened in first class so yes there are very rude and inconsiderate people in FC at times. People, pay attention and watch your manners when traveling, please

Published by: Ken Meyer in Travel 5 years, 9 months ago

I feel like I am watching an episode of L.A.Law or Boston Legal...in real life. I am sitting in the second row of first class. Just in front of me in row one are two legal love birds headed to DC. He, sitting in the aisle seat. She the window. He looks to be in his forties, curly permed and receding hairline, wearing a nice but off the rack pin striped suit. No top coat but a wool scarf draped around his neck, tie untied but still settled under his buttoned down collar. He appears to spend time in the gym. He is "cool and confident". She, probably late thirties, blonde, attractive, professional in appearance and a bit doe eyed. As soon as they sit down they start chattering, rather loudly. He regaling her with his trips to Berlin and Prague. She hangs on every word. They talk about their respective experiences in law school while drinking their cheap but ok wine. He red. She white. I hear them talk about cases, etc, in between small smooch sessions. He then starts talking about his three kids, and of course whips out his phone to show beach pictures. She oohs and ahs for effect while the cuddle up when the lights dim. They still feign interest in legal talk as they begin to quiet down and get a little closer. This is where it got funny. One of his apparently younger colleagues walks by on the way to the lavatory and says hello. I thought the guy was going to break his chair trying to sit back up and look "professional". I am guessing there is at least one spouse in this story that is not in this particular episode. Dang, this is entertaining. Lol